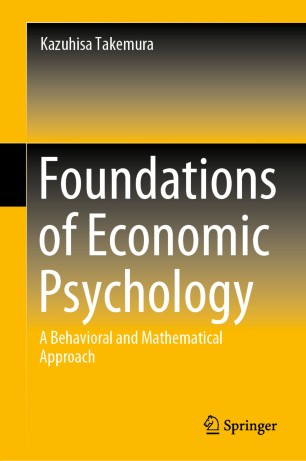 A Behavioral and Mathematical Approach

This book provides an overview of the concept of economic psychology from behavioral and mathematical perspectives and related theoretical and empirical findings. Economic psychology is defined briefly as a general term for descriptive theories to explain the psychological processes of microeconomic behaviors and macroeconomic phenomena. However, the psychological methodology and knowledge of economic psychology have also been applied widely in such fields as economics, business administration, and engineering, and they are expected to become increasingly useful in the future—a trend suggested in several eminent scholars’ studies.
The book explains the numerous behavioral and mathematical models of economic psychology related to micro- and macroeconomic phenomena that have been proposed in the past, and introduces new models that are useful to explain human economic behaviors. It concludes with speculations about the future of modern economic psychology, referring to its connection with fields related to neuroscience, such as neuroeconomics, which have been developed in recent years.
Readers require no advanced expertise; nonetheless, an introductory understanding of psychology, business administration, and economics, and a high- school-graduate level of mathematics are useful. To aid readers, each chapter includes a bibliography, which can be referred for more details related to economic psychology.