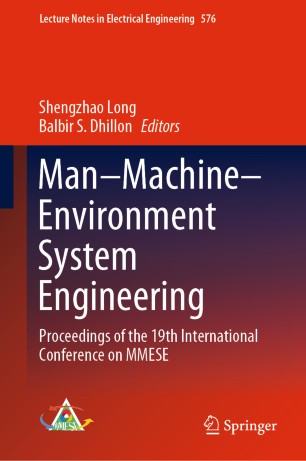 Proceedings of the 19th International Conference on MMESE

These proceedings showcase the best papers selected from more than 500 submissions, and introduce readers to the latest research topics and developmental trends in the theory and application of MMESE. The integrated research topic Man–Machine–Environment System Engineering (MMESE) was first established in China by Professor Shengzhao Long in 1981, with direct support from one of the greatest modern Chinese scientists, Xuesen Qian. In a letter to Long from October 22nd, 1993, Qian wrote: “You have created a very important modern science and technology in China!”

MMESE studies the optimum combination of man–machine–environment systems. In this system, “man” refers to the people in the workplace (e.g. operators, decision-makers); “machine” is the general name for any object controlled by man (including tools, machinery, computers, systems and technologies), and “environment” describes the specific working conditions under which man and machine interact (e.g. temperature, noise, vibration, hazardous gases, etc.). The three main goals of optimizing man–machine–environment systems are to ensure safety, efficiency and economy.

These proceedings present interdisciplinary studies on concepts and methods from physiology, psychology, system engineering, computer science, environmental science, management, education, and other related disciplines. They offer a valuable resource for all researchers and professionals whose work involves interdisciplinary areas touching on MMESE subjects.

Dr. Balbir S. Dhillon attended the University of Wales where he received a B.S. in electrical and electronic engineering and an M.S. in mechanical engineering. He received a Ph.D. in industrial engineering from the University of Windsor. He is a professor of Engineering Management in the Department of Mechanical Engineering at the University of Ottawa, Canada. He has served as a Chairman/Director of Mechanical Engineering Department/Engineering Management Program for over 10 years at the same institution. He published over 345 (i.e., 201 journals + 144 conference proceedings) articles on reliability, safety, engineering management, etc. He is or has been on the editorial boards of 9 international scientific journals. In addition, Dr. Dhillon wrote 34 books on various aspects of reliability, design, safety, quality, and engineering management. His books are being used in over 85 countries and many of them are translated into languages such as German, Russian and Chinese. He served as General Chairman of two international conferences on reliability and quality control held in Los Angeles and Paris in 1987.