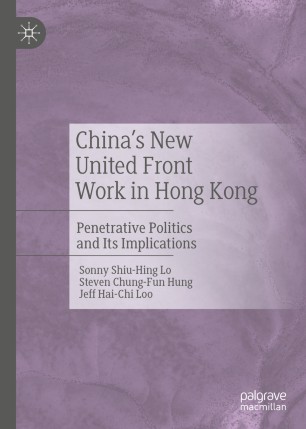 Penetrative Politics and Its Implications

This book explores the dynamics of China’s new united front work in Hong Kong. Mainland Chinese penetrative politics can be seen in the activities of local pro-Beijing political parties, clans and neighborhood associations, labor unions, women and media organizations, district federations, and some religious groups. However, united front work in the educational and youth sectors of civil society has encountered strong resistance because many Hong Kong people are post-materialistic and uphold their core values of human rights, the rule of law and transparency. China’s new united front work in Hong Kong has been influenced by its domestic turn toward “hard” authoritarianism, making Beijing see Hong Kong’s democratic activists and radicals as political enemies. Hong Kong’s “one country, two systems” is drifting toward “one country, two mixed systems” with some degree of convergence. Yet, Taiwan and some foreign countries have seen China’s united front work as politically destabilizing and penetrative. This book will be of use to scholars, journalists, and observers in other countries seeking to reckon with Chinese influence.
Sonny Shiu-Hing Lo is Professor of Politics at the School of Professional and Continuing Education at the University of Hong Kong.
Steven Chung-Fun Hung is Assistant Professor in Social Sciences at the Education University of Hong Kong.
Jeff Hai-Chi Loo is Research Assistant in Political Science at Hong Kong Lingnan University.