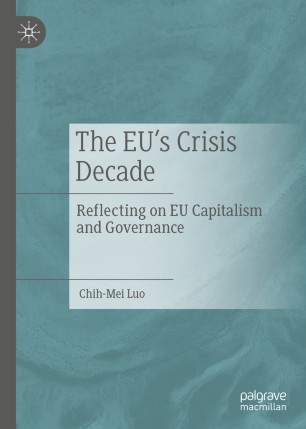 Reflecting on EU Capitalism and Governance

This is a thoughtful and well-argued work that should be reading for EU scholars and all who care for its future."
—Dr. Michael Reilly, former UK representative to Taiwan (2006-2009)
"This well-researched book is a stimulating read.  It looks at a number of the problems of the EU in recent years and presents a coherent interpretation in terms of its underlying failure by pursuing economic liberal solutions at the expense of social cohesion and equality."
—Prof. John Greenaway, Emeritus Professor, East Anglia University, UK
This book aims to provide an analysis of the EU’s crisis decade—from the euro crisis to the populist right parties’ resurgence and Brexit. The EU has encountered a series of crises since 2008 when the Greek sovereign debt crisis first broke out and brought forth the euro crisis. This was soon followed by the rise of anti-EU populist right parties, culminating in their unprecedented victory in the 2014 European Parliament Elections. The most unexpected shock, however, was the Brexit result of the UK's EU referendum in 2016. Providing a valuable external perspective on these events grounded in the realities of the Asian boom, this book will be of value to scholars, policymakers, and economists.
Chih-Mei Luo is Jean Monnet Chair Professor at the Department of Public Administration and Policy, National Taipei University, Taiwan. She holds a PhD from the University of East Anglia, UK. Her main research focus is on European integration, European single currency/Euro, Economic governance and UK politics. She is the author of the two Chinese volumes, Reviewing the Effects of Regional Economic Integration: The Cases of  Germany, France, and the UK as EU Members (2014), and The Euro and European Integration: History, Crisis and Prospects (2014). She is also the winner of the  2016 Academic Award of Sun Yat Sen Academic and Cultural Foundation.