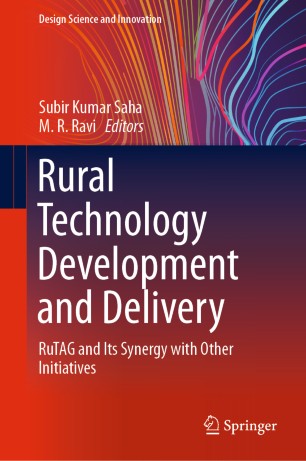 RuTAG and Its Synergy with Other Initiatives

Part of the Design Science and Innovation book series (DSI)

This book comprises the proceedings of a rural technologies conference organised by the Rural Technology Action Group (RuTAG), which was conceptualized and initiated by Principal Scientific Adviser (PSA) to the Government of India R. Chidambaram in 2003–04. The book highlights case studies and research into providing science and technology interventions for the development of rural areas. Covering various aspects of research carried out in the area of rural technologies, it offers a valuable resource for researchers, professionals, and policymakers alike.

Prof. Subir Kumar Saha received his mechanical engineering degree from RE College (now NIT), Durgapur, India, in 1983, prior to completing his M.Tech. at the IIT Kharagpur, India, and his Ph.D. at McGill University, Canada. After his studies, he joined Toshiba Corporation’s R&D Center in Japan. After four years of work experience in Japan, he has been with IIT Delhi since 1996, and is currently a Professor at the Department of Mechanical Engineering. He is actively engaged in teaching, research, and technology, and has completed projects worth more than US$ 1 million. He established the Mechatronics Laboratory at the IIT Delhi in 2001. In recognition of his international contributions, Prof. Saha was awarded a Humboldt Fellowship by the AvH Foundation, Germany, in 1999, and a Naren Gupta Chair Professorship at the IIT Delhi in 2010. He has also been a visiting faculty member in Canada, Australia, and Italy. Prof. Saha has authored more than 175 research publications in reputed journals/conference proceedings, delivered more than 150 invited/keynote lectures in India and abroad, written several books and helped developed RoboAnalyzer, a software package intended to make learning robotics fun.

Prof. M. R. Ravi is a Professor at the Department of Mechanical Engineering, IIT Delhi. He received his M.E. and PhD. in Mechanical Engineering from the Indian Institute of Science, Bangalore in 1988 and 1991, respectively. His areas of interest include heat transfer, computational fluid dynamics, combustion, biomass energy and rural energy systems, and his research currently focuses on characterizing gaseous fuel mixtures, and developing energy-efficient biomass gasification and rural industrial energy systems. Prior to joining the IIT Delhi, he worked at the IIT Bombay, CNRS (France) and TU Delft (the Netherlands).