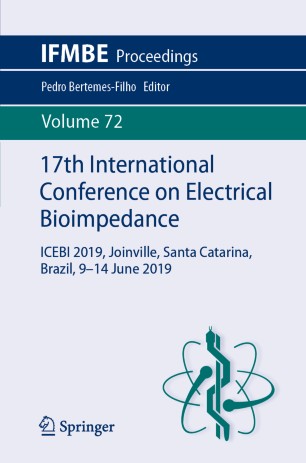 This book gathers the proceedings of the 17th International Conference on Electrical Bioimpedance (ICEBI 2019), held on June 9-14, in Joinville, Santa Catarina, Brazil. The chapters cover the latest knowledge and developments concerning: sensors and instrumentation to measure bioimpendance, bioimpedance imaging techniques, theory and modeling and bioimpendance, as well as cutting-edge clinical applications of bioimpendance. All in all, this book provides graduate students and researchers with an extensive and timely snapshot of current research and challenges in the field of electrical bioimpendance, and a source of inspiration for future research and cross-disciplinary collaborations.

Pedro Bertemes Filho (born in Florianopolis, Brazil, in 1970) is a Full Professor at the Universidade de Estado Santa Catarina (UDESC). He obtained a bachelor’s degree in Electrical Engineering from the State University of Santa Catarina (1995), and a master’s degree in Biomedical Engineering from the Federal University of Santa Catarina (1998). In 2002 he obtained a PhD degree in Medical Physics from the University of Sheffield. He worked as a Post-Doc at the same University, and later at the University of Sao Paulo. He currently serves as a Full Professor at UDESC, where he teaches course to master’s and doctoral students on electronic instrumentation, sensors and transducers, and biomedical engineering. He lead both the biomedical engineering and electrical bioimpedance research groups at UDESC. Member of IEEE, ISEBI, ICPRBI, SBEB, IFMBE and ATINER, he also serves as a reviewer for more than 10 international journals. He served as a chair of the first Latin American Conference on Bioimpedance (CLABIO 2012) and of the XVII International Conference on Electrical Bioimpedance (ICEBI 2019) in Joinville. He is also lecturing at the Universities of Uruguay and Ljubljana, at the Technical University of Denmark, and at the Summer School of Bioimpedance organized by IEEE in 2017 in Mexico. In 2017, he was also awarded as a Fulbright Visiting Researcher at Dartmouth College (USA). Currently, he serves as a secretary of the International Society on Electrical Bioimpedance (ISEBI). His research topics includes: Electrical Bioimpedance, Bioinstrumentation, Biosensor and e-Health.