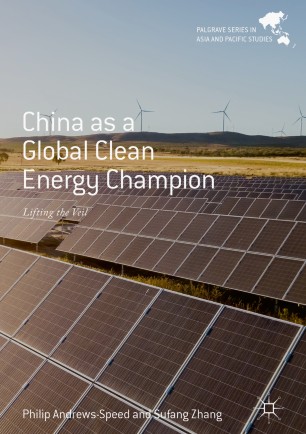 This book considers China’s role as a rising champion of clean energy and document the policy decisions and actions which have underpinned this evolution. It considers the construction of the world’s largest fleets of advanced coal-fired power stations, wind farms and solar photovoltaic arrays, examines sustained efforts to reduce national GDP intensities of energy and CO2 emissions, and assesses the rhetoric of government announcements on national policy and international commitments, including the Thirteenth Five-year Plan for Energy (2016-2020). The book notably considers the factors that have supported these achievements, including the availability of large amounts of capital, the role of state-owned companies with soft budgetary constraints, and many forms of indirect support from local governments. It also explores the obstacles to reaching the formal goals of reducing air pollution and CO2 emissions as well as the costs and unintended consequences of these policies, and identifies those parts of the energy supply chain where the governance of energy has been less effective in terms of energy efficiency and environmental protection.

Philip Andrews-Speed is a Senior Principal Fellow at the Energy Studies Institute, National University of Singapore, Singapore. He has 35 years in the field of energy and resources, starting his career as a mineral and oil exploration geologist before moving into the field of energy and resource governance. Until 2010 he was Professor of Energy Policy at the University of Dundee and Director of the Centre of Energy, Petroleum and Mineral Law and Policy. His main research interest is the political economy of energy and resource governance. Recent books include China, Oil and Global Politics (with Roland Dannreuther) and The Governance of Energy in China: Transition to a Low-Carbon Economy.

Sufang Zhang is Professor at the School of Economics and Management, North China Electric Power University (NCEPU), China. Before joining the NCEPU in 1993, she worked in provincial government as a project officer in charge of international aid programmes. Her research field focuses on energy policy, China’s renewable energy policy in particular. She has directed and participated in many renewable energy research projects supported by China’s central and local government, as well as international organizations such as the Energy Foundation China. Recent research projects include Institutional Constraints to the Renewable Energy Development in China.

“This volume, China as a Global Clean Energy Champion (hereafter ‘the book’ or ‘China and Clean Energy’) is a substantial contribution to energy research and scholarship. … this book, which I heartily commend to my readers attention, is an enormously valuable contribution to international energy scholarship and literature in its own right.” (William F. Fox, OGEL, Oil, Gas & Energy Law Intelligence, October 07, 2019)
Buy options