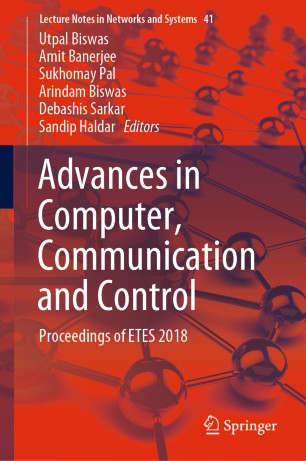 Advances in Computer, Communication and Control

Part of the Lecture Notes in Networks and Systems book series (LNNS, volume 41)

The book discusses the recent research trends in various sub-domains of computing, communication and control. It includes research papers presented at the First International Conference on Emerging Trends in Engineering and Science. Focusing on areas such as optimization techniques, game theory, supply chain, green computing, 5g networks, Internet of Things, social networks, power electronics and robotics, it is a useful resource for academics and researchers alike.

Amit Banerjee is a Scientist ER at the Department of Electrical and Computer Engineering at the National University of Singapore. Previously he was Scientific Researcher at the Advanced Device Research Division, Shizuoka University, Japan. He was also a Research Associate at Energy Research Unit, Indian Association for the Cultivation of Science, Jadavpur, and has worked as an engineer at Farris Engineering, Gurgaon. He completed his Ph.D. in Synthesis and Optimisation of Nano-materials in 2016 at Jadavpur University, and his Master’s in Physics from JNU, New Delhi. His area of interests includes microelectronics, semiconductor and solid-state devices, optoelectronics-photonics, solar cells and thin films. He is an active reviewer, editor and advisory committee member of several international conferences. He has published in numerous high impact journals, and has filed two patents. He is currently involved in the development of instrumentation.

Sukhomay Pal is Associate Professor at the Indian Institute of Technology, Guwahati. He was a Postdoc fellow at University of Pretoria, South Africa, and was also a Co-chief Adviser and Maintenance Engineer for Pal & Das Ceramic, Asansol, West Bengal. He completed his Ph.D. on Development and Validation of Soft Computing Based Models for Pulsed Gas Metal Arc Welding Processes at the Department of Mechanical Engineering, IIT Kharagpur. He received his Master’s from Bengal Engineering and Science University, West Bengal and Bachelor’s from Jadavpur University. His research interests include welding process monitoring and control, tool condition monitoring, non-conventional machining process, application of artificial neural network, and genetic algorithms. He actively publishes in these areas and is also reviewer for several journals and conferences.

Arindam Biswas is Associate Professor at the Department of Electronics and Communication Engineering, Asanol Engineering College. He received his Ph.D. in the Effect of Electric Field in Ferroelectronics and Discrete Breathers in Optical Communication from the National Institute of Technology, Durgapur, his M.Tech. from Calcutta University and B.Tech. from West Bengal University. He completed his Postdoc in Optical Material at Pusan National University, South Korea. His research interests include electron devices & circuits, IMPATT THz source, and electrical engineering. He has published numerous papers in high impact journals and conferences. He also has one patent and is a reviewer and editor of a number of journals and conferences.

Sandip Haldar is Associate Professor in Asansol Engineering College. He completed his Ph.D. in Solid State Physics at Jadavpur University and at present he is working on nanometerials. He received his M.Sc. in Physics from Calcutta University. He has published papers in numerous journals as well as conference proceedings. He has been an investigator in various research projects funded by the DST and UGC.