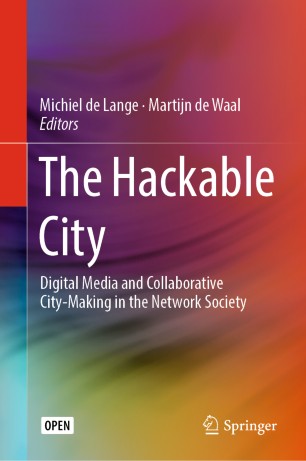 Digital Media and Collaborative City-Making in the Network Society

This open access book presents a selection of the best contributions to the Digital Cities 9 Workshop held in Limerick in 2015, combining a number of the latest academic insights into new collaborative modes of city making that are firmly rooted in empirical findings about the actual practices of citizens, designers and policy makers. It explores the affordances of new media technologies for empowering citizens in the process of city making, relating examples of bottom-up or participatory practices to reflections about the changing roles of professional practitioners in the processes, as well as issues of governance and institutional policymaking.

Michiel de Lange is an assistant professor in new media studies at Utrecht University’s Department of Media and Culture Studies. He obtained a PhD in Philosophy (2010) from the Erasmus University Rotterdam, and works as a researcher and lecturer in the field of (mobile) media, urban culture, identity and play. He is the co-founder of The Mobile City, a platform for the study of new media and urbanism, and the [urban interfaces] research group at Utrecht University.

Martijn de Waal is a lector at the Lectorate of Play & Civic Media at the Amsterdam University of Applied Sciences. He holds a PhD from the University of Groningen (2012) and is an internationally renowned scholar in the field of urban media, place making and citizen empowerment. His book ‘The City as Interface: How Digital Media are Changing the City’ has been internationally well received, and he is regularly invited as a keynote speaker at both academic and professional conferences around the world.