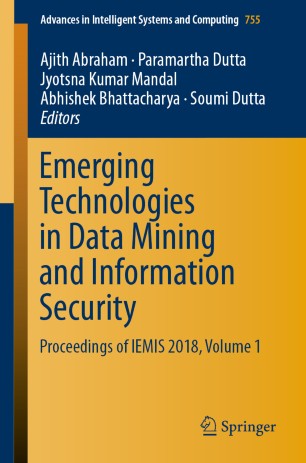 Part of the Advances in Intelligent Systems and Computing book series (AISC, volume 755)

This book features research papers presented at the International Conference on Emerging Technologies in Data Mining and Information Security (IEMIS 2018) held at the University of Engineering & Management, Kolkata, India, on February 23–25, 2018. It comprises high-quality research work by academicians and industrial experts in the field of computing and communication, including full-length papers, research-in-progress papers, and case studies related to all the areas of data mining, machine learning, Internet of Things (IoT) and information security.

Ajith Abraham’s research and development experience includes over 24 years in academia and industry. He works in a multi-disciplinary environment involving machine (network) intelligence, cyber security, sensor networks, Web intelligence, scheduling, and data mining applied to various real-world problems. He has given more than 70 conference plenary lectures/tutorials and invited seminars/lectures in over 50 universities around the globe. He is an author/co-author of over 900 publications, some of which have won best paper awards at international conferences, and a number of them are among the ScienceDirect Top 25 hottest articles. Since 2008, he has chaired the IEEE SMC Society Technical Committee on Soft Computing and he also represented the IEEE Computer Society Distinguished Visitors Program in Europe (2011–13). He serves/has served the editorial board of over 50 international journals in various capacities. An active ACM/IEEE volunteer, he has initiated and is also involved in the organization of several annual conferences co-sponsored by IEEE/ACM: HIS (14 years), ISDA (14 years), IAS (10 years), NWeSP (8 years), NaBIC (6 years), SoCPaR (6 years), and CASoN (6 years). Currently, he is also coordinating the activities of the Machine Intelligence Research Labs (MIR Labs), International Scientific Network for Innovation and Research Excellence, which has members from nearly 100 countries. During the last 15 years, he has been associated with universities in Australia, America, Europe, Asia, Africa and the Middle East, teaching (short courses to semester programs) and supervising PhD students and in research collaborations. He worked under the Institute of Information Technology Advancement (IITA) Professorship Program funded by the South Korean Government. Before becoming a full-time academic, he worked for three International companies: Keppel Engineering, Singapore, Hyundai Engineering, Korea and Ashok Leyland Ltd, India where he was involved in different industrial research and development projects for nearly 8 years. He received his Ph.D. degree in Computer Science from Monash University, Australia and a Master of Science degree from Nanyang Technological University, Singapore.

Dr. Paramartha Dutta, M.Stat., M.Tech. (Computer Science) from Indian Statistical Institute Kolkata, and Ph.D. (Engineering) from what is now the Indian Institute of Engineering Science and Technology, has been a professor at the Department of Computer and System Sciences, Visva Bharati University, Santiniketan, India for more than eight years. He has published one hundred and sixty papers in journals and conference proceedings, six books and three edited books. He has successfully handling various projects funded by the Government of India. Moreover, he has supervised three Ph.D scholars. Dr. Dutta is member/fellow of various professional bodies, including IEEE and ACM.

Jyotsna Kumar Mandal is a professor of Computer Science and Engineering, at the University of Kalyani, India. Ex-Dean of the Faculty of Engineering, Technology & Management, he has 26 years of teaching and research experience. He is a life member of Computer Society of India and of the Cryptology Research Society of India, a member of AIRCC, and associate member of IEEE and ACM. His research interests include network security, steganography, remote sensing & GIS applications, image processing, and wireless and sensor networks. Domain Expert of Uttarbanga Krishi Viswavidyalaya, Bidhan Chandra Krishi Viswavidyalaya for planning and integration of Public domain networks. He has been associated with national and international journals and conferences. He has written more than 320 publications, including 110 in various international journals. Currently, he is working as Director, IQAC, Kalyani University.

Abhishek Bhattacharya is an assistant professor at the Computer Application Department at the Institute of Engineering & Management, India. He completed his MCA at Biju Patnaik University of Technology, M.Tech. at BIT Mesra and is pursuing his Ph.D. at BIT Mesra. He is a member of the International Association of Computer Science and Information Technology (IACSIT), Universal Association of Computer and Electronics Engineers (UACEE), International Association of Engineers (IAENG), Internet Society as a Global Member (ISOC), The Society of Digital Information and Wireless Communications (SDIWC) and International Computer Science and Engineering Society (ICSES); Technical Committee member of CICBA 2017, 52nd Annual Convention of Computer Society of India (CSI 2017) and the Conference on Innovative Computing and Communication (ICICC-2018); and Advisory Board Member of ISETIST 2017. He has published papers in several journals.