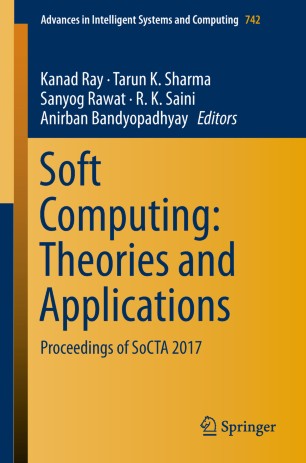 Part of the Advances in Intelligent Systems and Computing book series (AISC, volume 742)

The book focuses on soft computing and its applications to solve real-world problems occurring in different domains ranging from medicine and healthcare, and supply chain management to image processing and cryptanalysis. It includes high-quality papers presented in the International Conference on Soft Computing: Theories and Applications (SoCTA 2017), organized by Bundelkhand University, Jhansi, India. Offering significant insights into soft computing for teachers and researchers alike, the book inspires more researchers to work in the field of soft computing.

Dr. Kanad Ray is a Professor and Head of Physics at the Amity School of Applied Sciences Physics, Amity University Rajasthan (AUR), Jaipur, India. He has obtained M.Sc. and Ph.D. degrees in Physics from Calcutta University and Jadavpur University , West Bengal, India. In an academic career spanning over 22 years, he has published and presented research papers in several national and international journals and conferences in India and abroad. He has authored a book on the Electromagnetic Field Theory. Prof. Ray’s current research areas of interest include cognition, communication, electromagnetic field theory, antenna & wave propagation, microwave, computational biology, and applied physics. He has served as the Editor of Springer Book Series. Presently, he is an Associate Editor of the Journal of Integrative Neuroscience published by the IOS Press, Netherlands. He has established a Memorandum of Understanding (MOU) between his University and University of Montreal, Canada for various joint research  activities. He has also established collaboration with the National Institute for Materials Science (NIMS), Japan for joint research activities and visits NIMS as a visiting Scientist. He  organizes international conference series  such as SoCTA  and ICoEVCI as General Chair. He is an Executive Committee member of the IEEE Rajasthan Chapter.

Dr. Tarun Kumar Sharma has a Ph.D. in Artificial Intelligence as well as MCA and MBA degrees, and is currently associated with the Amity University Rajasthan (AUR) in Jaipur. His research interests encompass swarm intelligence, nature-inspired algorithms and their applications in software engineering, inventory systems, and image processing. He has published more than 60 research papers in international journals and conferences. He has over 13 years of teaching experience and has also been involved in organizing international conferences. He is a certified internal auditor and a member of the Machine Intelligence Research (MIR) Labs, WA, USA and Soft Computing Research Society, India.

Dr. Anirban Bandyopadhyay is a Senior Scientist at the National Institute for Materials Science (NIMS), Tsukuba, Japan. He completed his Ph.D. in Supramolecular Electronics at the Indian Association for the Cultivation of Science (IACS), Kolkata, 2005. From 2005 to 2008 he was an independent researcher, as an ICYS research fellow at the International Center for Young Scientists (ICYS), NIMS, Japan, where he worked on the brain-like bio-processor building. In 2008, he joined as a permanent scientist at NIMS, working on the cavity resonator model of human brain and design synthesis of brain-like organic jelly. From 2013 to 2014 he was a visiting Scientist at the Massachusetts Institute of Technology (MIT), USA. He has received several honors, such as the Hitachi Science and Technology award 2010, Inamori Foundation award 2011–2012, Kurata Foundation Award, Inamori Foundation Fellow (2011–), and Sewa Society international member, Japan. He has patented ten inventions such as (i) a time crystal model for building an artificial human brain, (ii) geometric-musical language to operate a fractal tape to replace the Turing tape, (iii) fourth circuit element that is not memristor, (iii) cancer and Alzheimer’s drug, (iv) nano-submarine as a working factory and nano-surgeon, (vi) fractal condensation based synthesis, (vii) a thermal noise harvesting chip, (viii) a new generation of molecular rotors, (ix) spontaneous self-programmable synthesis (programmable matter), and (x) fractal grid scanner for dielectric imaging. He has also designed and built multiple machines and technologies, (i) Terahertz (THz)-magnetic nano-sensor, (ii) a new class of fusion resonator antennas etc. Currently, he is building time crystal based artificial brain using three ways, (i) knots of darkness made of fourth circuit element, (ii) integrated circuit design, and (iii) organic supramolecular structure.