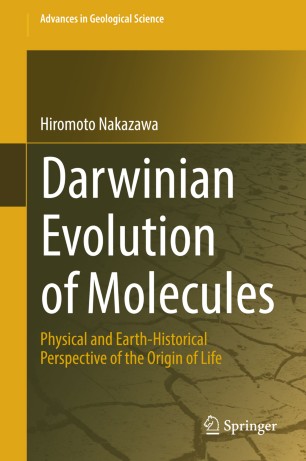 Physical and Earth-Historical Perspective of the Origin of Life

Part of the Advances in Geological Science book series (AGS)

On the basis of thermodynamic considerations and the Earth’s historical processes, this book argues the physical inevitability of life’s generation and evolution, i.e., Why did life generate? Why does life evolve? Following an introduction to the problem, the hypothesis “Darwinian Evolution of Molecules” is proposed, which explains how, when, and where life was instigated through successive chemical reactions and the survival of selected molecules. The individual processes described are all scientifically reasonable, being verifiable by experiment. The hypothesis is supported by extensive reference to the scientific literature published in academic journals, including some experimental reports from the author’s own research group. The readers of this book will learn that the decreasing temperature of the early Earth led to a reduction in its entropy, inducing the Earth’s materials to order, which entailed ordering of the light elements as organic molecules with subsequent further ordering (i.e., evolution) to systems that can be considered alive (i.e., life). Researchers and students, as well as the non-academic audience, interested in the interdisciplinary problem of the origin of life will find suggestions and possible approaches to the scientific and conceptual problems they may be facing.