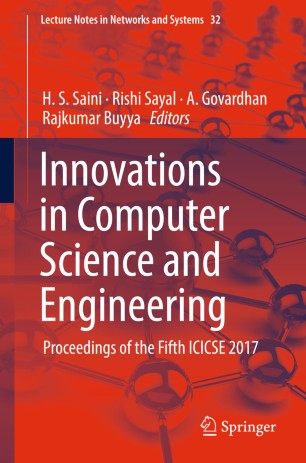 Innovations in Computer Science and Engineering

Proceedings of the Fifth ICICSE 2017

Part of the Lecture Notes in Networks and Systems book series (LNNS, volume 32)

The book is a collection of high-quality peer-reviewed research papers presented at the Fifth International Conference on Innovations in Computer Science and Engineering (ICICSE 2017) held at Guru Nanak Institutions, Hyderabad, India during 18-19 August 2017. The book discusses a wide variety of industrial, engineering and scientific applications of the engineering techniques. Researchers from academic and industry present their original work and exchange ideas, information, techniques and applications in the field of Communication, Computing and Data Science and Analytics.

Dr. H.S. Saini Managing Director of Guru Nanak Institutions obtained his Ph.D. in the field of Computer Science. He has over 22 years of experience at the university/college level in teaching UG/PG students and has guided several B.Tech., M.Tech., and Ph.D. Projects. He has published/presented high quality research papers in International, national journals and proceedings of International conferences. He has two books to his credit. Dr. H.S. Saini is a lover of innovation and is an advisor for NBA/NAAC accreditation process to many institutions in India and abroad.

Dr. Rishi Sayal Associate Director of Guru Nanak Institutions Technical Campus has done B.E. (CSE), M.Tech (IT), Ph.D.(CSE), LMCSI, LMISTE, MIEEE and MIAENG (USA). He completed his Ph.D. in Computer Science and Engineering in the field of Data Mining from the prestigious and oldest Mysore University of Karnataka State. He has over 25 years of experience in training, consultancy, teaching, and placements. His current areas of research interest include data mining, network security and databases.

Dr. A. Govardhan completed his B.E from O.U. in 1992 and M. Tech from Jawaharlal Nehru University (JNU) in 1994 and completed his Ph.D in 2003 from JNTUH, Presently working as principal for JNTUH CEH and Professor in Department of CSE JNTU College of Engineering, Hyderabad. He has guided more than 66 Ph.D scholars. He has over 23 years of teaching and research experience and filed 3 patents, published 2 books with reputed publishers such as Springer. He has received more than 26 International and National Awards. He has 2058 citations since 2012. He is a member on Advisory Boards and Academic Boards and Technical Program Committee Member for more than 60 International and National Conferences. He served as Convener for various State level activities like TS ECET-2017, Co-Convener for TS EAMCET-III-2016.

Dr. Rajkumar Buyya completed his B.E CSE from University of Mysore in 1992 and M.E CSE from Bangalore University in 1995 and completed his Ph.D in 2002 in CSE from Monash University, Melbourne, Australia. Presently, he is Director, Cloud Computing and Distributed Systems (CLOUDS) Laboratory School of Computing and Information Systems. He is a Professor, University of Melbourne, Australia since 2010. He also worked as Guest Faculty for various International and National Universities. He has co-authored over 540 publications – 170 journal articles, 225 conference papers, 55 book chapters, 6 textbooks, 9 edited research books. His h-index is 108 and has received over 55,500 citations and received best paper awards for recent conference. He has received Dharma Ratnakara Memorial Trust Gold Medal for Academic Excellence for securing Ist Rank in B.E CSE. He has received various awards and scholarships, funding for various International and National research projects from 2002. He has 3 patents, published 7 books with reputed publishers such as Tata McGraw-Hill, edited 9 books and various book chapters.