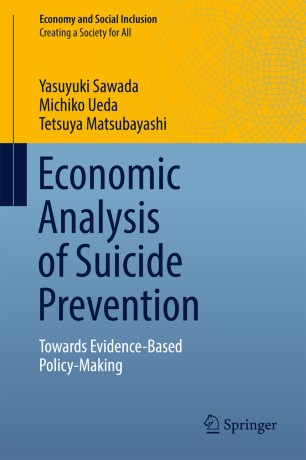 Part of the Economy and Social Inclusion book series (ESI)

This book examines the causes and consequences of suicide from the perspective of economics. The approach here differs from those in medical, psychiatric, epidemiological, and sociological studies of suicide and is thus novel in a way that highlights the importance of economic and institutional settings in the problem of suicide. The authors argue that suicide imposes a tremendous economic cost on contemporary society in a variety of ways, requiring the government to develop an effective prevention strategy. An empirical analysis using data from Japan and other developed countries shows that natural disasters and economic crises increase suicide rates, while liberal government policies favorable to the poor can decrease them. Further, the types of effective prevention strategies in the context of railway/subway suicides, celebrity suicides, public awareness campaigns, and education using data primarily from Japan are revealed.  This book ultimately contributes to an understanding of suicides and the development of evidence-based policy proposals. The Japanese version of this book won the 56th Nikkei Prize for Economics Books (Nikkei Keizai Tosho Bunka Award) in 2013.