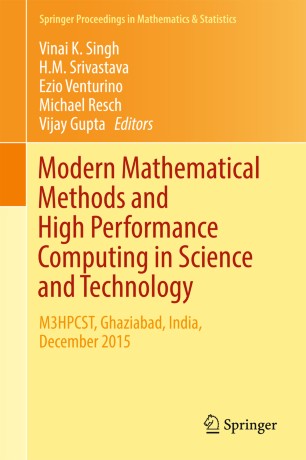 The book discusses important results in modern mathematical models and high performance computing, such as applied operations research, simulation of operations, statistical modeling and applications, invisibility regions and regular meta-materials, unmanned vehicles, modern radar techniques/SAR imaging, satellite remote sensing, coding, and robotic systems. Furthermore, it is valuable as a reference work and as a basis for further study and research. All contributing authors are respected academicians, scientists and researchers from around the globe. All the papers were presented at the international conference on Modern Mathematical Methods and High Performance Computing in Science & Technology (M3HPCST 2015), held at Raj Kumar Goel Institute of Technology, Ghaziabad, India, from 27–29 December 2015, and peer-reviewed by international experts.

The conference provided an exceptional platform for leading researchers, academicians, developers, engineers and technocrats from a broad range of disciplines to meet and discuss state-of-the-art mathematical methods and high performance computing in science & technology solutions. This has brought new prospects for collaboration across disciplines and ideas that facilitate novel breakthroughs.

Vinai K. Singh is professor at the Department of Applied Mathematics at Raj Kumar Goel Institute of Technology, Ghaziabad, India. He holds a PhD degree in approximation theory from the Department of Applied Mathematics, Institute of Technology, Banaras Hindu University, Varanasi, India. He has been actively engaged in research activities since 1997. His area of research is functional analysis, approximation theory and different kind of positive operators. He is author of three book chapters and over 24 research papers in the international journals. He referees articles for professional journals and serves as editorial member of many national and international journals.

H. M. Srivastava is professor emeritus at the Department of Mathematics and Statistics, University of Victoria, Canada. He joined the University of Victoria in 1969, first as associate professor (1969–1974), and then as full professor (1974–2006). Professor Srivastava has held numerous visiting positions including (for example) those at West Virginia University in the U.S.A (1967–1969), Universite Laval in Canada (1975), and the University of Glasgow in the U.K. (1975–1976), and indeed also at many other universities and research institutes in different parts of the world. Professor Srivastava has published 21 books (monographs and edited volumes), 30 book chapters, 45 papers in international conference proceedings, and over 1,000 scientific research journal articles on various topics of mathematical analysis and applicable mathematics. In addition, he has written forewords to several books by other authors and to several special issues of scientific journals. He has also edited (and contributed to) many volumes, which are dedicated to the memories of famous mathematical scientists. Citations of his research contributions can be found in many books and monographs, PhD and D.Sc. theses, and scientific journal articles, much too numerous to be recorded here. Currently, he is actively associated editorially (that is, as editor, honorary editor, senior editor, associate editor or editorial board member) with over 200 international scientific research journals. His biographical sketches (many of which are illustrated with his photograph) have appeared in various issues of more than 50 international biographies, directories and Who’s Who’s. Ezio Venturino has obtained his PhD in applied mathematics from SUNY at Stony Brook. His research interest lies in numerical analysis and mathematical modelling. In numerical analysis, he has studied quadrature formulae for singular integrals, methods for singular integral equations, and lacunary interpolation problems. In mathematical modelling, he has investigated biological and socioeconomic applications. Among his professional activities, he has coauthored a book for CRC Press and co-edited another book for Birkhauser. He has authored about 40 research papers in numerical analysis and over 160 in mathematical modelling. He has attended more than 150 international conferences with several plenary talks given upon invitation, contributing a paper to most, regularly organizing special sessions and chairing sessions and doing organizational work. He acts regularly as referee for several international journals. His editorial activity involves the following journals/books: Electronic Proceedings of WSEAS, Conference on Mathematics and Computers in Biology and Chemistry 2004, guest editor for WSEAS Transactions on Biology and Biomedicine, 1(4), October 2004, area editor for Simulation Theory and Practice (Elsevier) during 2008–2013, advisory editor for Mathematical Methods in the Applied Sciences (Wiley) since 2009, editorial board of Network Biology, Computational Ecology and Software, Shekhar (New Series) International Journal of Mathematics, Proceedings CMMSE 2008, 2009, 2010, 2011, 2012, 2013, 2014, Proceedings DWCAA 2009, associate editor for Contemporary Mathematics and Statistics (Columbia International Publishing) since 2012, Rendiconti del Seminario Matematico dell'Universita' e del Politecnico di Torino since 2015, member of BIOMAT Consortium Director Board since 2015, editorial board of Applied Mathematics and Nonlinear Sciences since 2016.

Michael Resch is the director of the High Performance Computing Center Stuttgart (HLRS) and the Department for HPC (IHR) at the University of Stuttgart, holding a full professorship at HPC. He was an invited plenary speaker at the International Conference for High Performance Computing, Networking, Storage and Analysis (SC07) in Reno, USA. He won HPC Wire awards for industrial applications in 2013 and 2015 and won with his team the HPC Challenge Award in 2003. In 1999, his team received the NSF Award for High Performance Distributed Computing. He holds honorable doctoral degrees of the Technical University of Donezk, Ukraine (2009) and of the Russian Academy of Science (2011) as well as an honorary professorship from the Russian Academy of Sciences (2014). Michael Resch is a principal investigator in the cluster of excellence for simulation technology as part of the German National Initiative for Excellence in Research. Michael Resch holds an MSc in Technical Mathematics (Technical University of Graz, Austria) and a PhD in Engineering from the University of Stuttgart. In 2002, he held an assistant professorship at the Department of Computer Science of the University of Houston, Texas.

Vijay Gupta is professor at the Department of Mathematics at Netaji Subhas Institute of Technology, New Delhi. He obtained his PhD from the University of Roorkee (now IIT Roorkee, India). His area of research is approximation theory, especially on convergence of linear positive operators. He is the author of two books, 11 book chapters and over 260 research papers in journals of international repute. He visited several universities globally for academic activities and delivered many lectures. He is actively associated editorially with over 25 international scientific research journals.