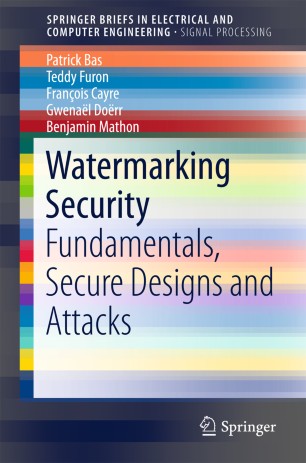 From 1997 to 2000, he was a member of the "Laboratoire des Images et des Signaux" de Grenoble (LIS), France, where he worked on still image watermarking. During his postdoctoral activities, he was a member of the Communications and Remote Sensing Laboratory of the Faculty of Engineering at the Université Catholique de Louvain, Belgium. From 2001 to 2009, he worked as a CNRS researcher at Gipsa-Lab, and since 2010, he works at LAGIS, Lille, France.

From 2005 to 2008, he was detached from Gipsa-Lab to work as a visiting researcher at the Computer and Information Science Laboratory in the Helsinki University of Technology, Finland.

His research interests include synchronization and security evaluation in watermarking, and steganalysis. From 2004 to 2008, he was co-coordinator of the virtual lab 1 on “watermarking and theory” within the Ecrypt European NoE. He has co-organized the 9th International Workshop on Information Hiding (IH07), the 2nd Edition of the Bows-2 contest on watermarking in 2007, and the first edition of the BOSS contest on steganalysis in 2010. Since 2011 Patrick Bas is associate editor of Eurasip Journal on Information Security and from 2013 to 2017 Patrick Bas is associate editor of IEEE Transactions of Information Forensics and Security (IEEE TIFS). Patrick Bas is the current group leader of the team working on Signal and Images in the LAGIS/CRISTAL Lab.

Teddy Furon is a senior researcher at INRIA Rennes, France, in the LinkMedia team. His fields of interest are digital watermarking, passive fingerprinting (a.k.a. traitor tracing), security of Content Based Image Retrieval and more broadly security issues related to multimedia content.

He received the Ph.D degree in signal and image processing in 2002 from Telecom ParisTech. From 1998 to 2001, he was a research engineer in the Security Lab of THOMSON multimedia, Rennes, France, working on digital watermarking in the framework of copy protection. He continued working in this field as a postdoctoral researcher at the TELE Lab of the Universite Catholique de Louvain, Louvain-la Neuve, Belgium. From Sept. 2008 to Jan. 2010, he worked in the Security Labs of Technicolor. Teddy Furon was an Associate Editor for EURASIP Journal on Information Security, IET Journal on Information Security, Elsevier Digital Signal Processing journal and IEEE Transactions on Information Forensics and Security.

Dr. François Cayre is an assistant professor at Grenoble-INP, France. He has been involved in multimedia security for more than 15 years. His works focused on 3D watermarking, watermarking security, fingerprinting security and image forensics. He has been a co-recipient of several best paper awards in the field. Among a few others, he is an associate editor for Elsevier DSP and a continuing program committee member of ACM IH&MMSec and IEEE WIFS.

Dr. Gwenaël Doërr is a Principal Scientist on content protection at Technicolor R&D France and a Distinguished Member of Technicolor’s Fellow Network. He has more than ten years research experience in multimedia security including works in content protection systems, digital watermarking, passive forensic analysis of multimedia content, steganography and steganalysis, and content fingerprinting. Throughout his career, he has worked both in academia (Institut Eurécom, University College London) and in industry (NEC, HP, Technicolor). He is also the Chair of the IEEE Technical Committee on Information Forensics and Security, an Area Chair for Columns and Forum for the IEEE Signal Processing Magazine, and an Associate Editor for the IEEE Transactions on Information Forensics and Security and the EURASIP Journal on Image and Video Processing.

Benjamin Mathon received the M.S. degree in cryptology, security, and information coding from the Université Joseph Fourier, Grenoble, France, in 2007, and the Ph.D. degree from the Université catholique de Louvain, Louvain-la-Neuve, Belgium, and the Institut polytechnique de Grenoble, France, in 2011. He was a Post-Doctoral Fellow with Institut polytechnique de Grenoble and Université de Genève, Switzerland, from 2011 to 2012, and a Post-Doctoral Fellow with Institut National de Recherche en Informatique et Automatique, Rennes, France, from 2012 to 2013. Since 2013, Benjamin Mathon is with Université de Lille 1 Sciences et Technologies as an Assistant Professor. His current research interests include color and multispectral image processing.