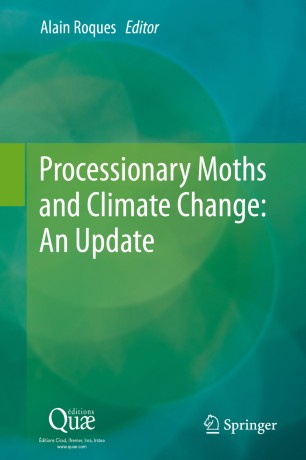 Because of its peculiar biology, its negative impacts on forestry, and its urticating larvae affecting human and animal health, pine processionary moth has largely been studied in many European countries during the last century. However, knowledge remained scattered and no synthesis has ever been published. Moreover, the predictions sometimes appear inconsistent with the present situation where warming up is triggering the expansion in both latitude and altitude of this species showing a winter larval development very sensitive to weak variations in temperatures. Thus, this forest pest is turning to an urban sanitary threat. Since the IPCC retained the moth as one of the two insect indicators of climate change, filling this knowledge gap became increasingly important. Successive projects developed since 2000 at the European and French levels (ANR URTICLIM) made large progresses in characterizing the processes underlying past, present and future moth expansion, in precising the adaptive mechanisms acting during expansion, in predicting the risks for specific biodiversity as well as for human and animal populations, and in identifying management methods adapted to the colonized areas. The international network PCLIM (International research network about the adaptive response of processionary moths and their associated organisms to global change’) was then founded by INRA in 2011, with the publishing of this book as a major target. It associates 101 authors from 22 countries of Europe, Minor Asia and North Africa, combining all the concerned research fields (entomology, ecology, genetics, mathematical modelling, medical and veterinary science, pest management) in a multidisciplinary approach of the natural history, genetics, phylogeography, impact on all organisms (tree, insect biodiversity, humans, animals), risk modelling, and management strategies for pine processionary moth. Besides, the major biological patterns of the related processionary species are detailed.