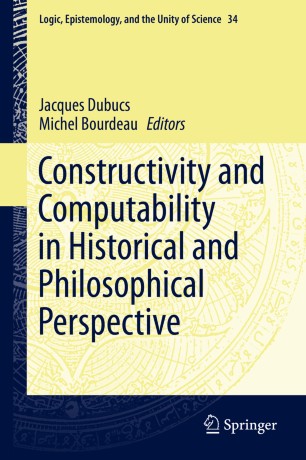 Part of the Logic, Epistemology, and the Unity of Science book series (LEUS, volume 34)

Ranging from Alan Turing’s seminal 1936 paper to the latest work on Kolmogorov complexity and linear logic, this comprehensive new work clarifies the relationship between computability on the one hand and constructivity on the other. The authors argue that even though constructivists have largely shed Brouwer’s solipsistic attitude to logic, there remain points of disagreement to this day.

Focusing on the growing pains computability experienced as it was forced to address the demands of rapidly expanding applications, the content maps the developments following Turing’s ground-breaking linkage of computation and the machine, the resulting birth of complexity theory, the innovations of Kolmogorov complexity, and resolving the dissonances between proof theoretical semantics and canonical proof feasibility. Finally, it explores one of the most fundamental questions concerning the interface between constructivity and computability: whether the theory of recursive functions is needed for a rigorous development of constructive mathematics.

This volume contributes to the unity of science by overcoming disunities rather than offering an overarching framework. It posits that computability’s adoption of a classical, ontological point of view kept these imperatives separated. In studying the relationship between the two, it is a vital step forward in overcoming the disagreements and misunderstandings which stand in the way of a unifying view of logic.