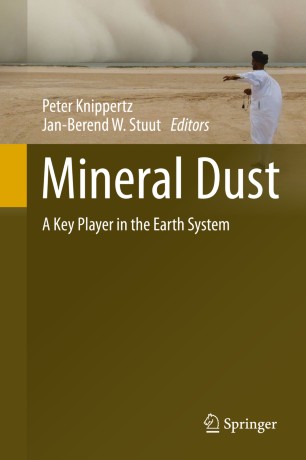 A Key Player in the Earth System

This volume presents state-of-the-art research about mineral dust, including results from field campaigns, satellite observations, laboratory studies, computer modelling and theoretical studies. Dust research is a new, dynamic and fast-growing area of science and due to its multiple roles in the Earth system, dust has become a fascinating topic for many scientific disciplines. Aspects of dust research covered in this book reach from timescales of minutes (as with dust devils, cloud processes, and radiation) to millennia (as with loess formation and oceanic sediments), making dust both a player and recorder of environmental change.

The book is structured in four main parts that explore characteristics of dust, the global dust cycle, impacts of dust on the Earth system, and dust as a climate indicator. The chapters in these parts provide a comprehensive, detailed overview of this highly interdisciplinary subject.

The contributions presented here cover dust from source to sink and describe all the processes dust particles undergo while travelling through the atmosphere. Chapters explore how dust is lifted and transported, how it affects radiation, clouds, regional circulations, precipitation and chemical processes in the atmosphere, and how it deteriorates air quality. The book explores how dust is removed from the atmosphere by gravitational settling, turbulence or precipitation, how iron contained in dust fertilizes terrestrial and marine ecosystems, and abou

t the role that dust plays in human health. We learn how dust is observed, simulated using computer models and forecast. The book also details the role of dust deposits for climate reconstructions.

Scientific observations and results are presented, along with numerous illustrations. This work has an interdisciplinary appeal and will engage scholars in geology, geography, chemistry, meteorology and physics, amongst others with an interest in the Earth system and environmental change.

Peter Knippertz is an expert in meteorological aspects of dust storms. He received his PhD in Meteorology from the University of Cologne (Germany) in 2003 and was a researcher at the Universities of Wisconsin-Madison (USA, 2003–2005), Mainz (Germany, 2005–2009), where he received his habilitation in 2008, and Leeds (UK, 2009–2013). In 2013 he moved to the Karlsruhe Institute of Technology (Germany), where he is now a Professor of Meteorology. He is currently leading a major 5-year project on dust emission funded by the European Research Council and a large European consortium on cloud-aerosol interactions in West Africa funded by the European Commission.

Jan-Berend Stuut has been working on aeolian dust from a marine perspective since his PhD, which he received from Utrecht University (the Netherlands) in 2001. After his PhD, he worked as a postdoctoral researcher at the Research Center Ocean Margins and the MARUM – Center for Marine Environmental Sciences, both at the University of Bremen, focusing on marine archives of mineral dust. He then moved to the NIOZ - Royal Netherlands Institute for Sea Research in 2009 to further study modern dust deposition processes in and offshore deserts around the world. Since 2012 he is leading two projects on the marine environmental effects of Saharan funded by both the Dutch NSF (NWO) and the European Research Council (ERC). He is still affiliated to MARUM, Bremen, where he also leads a project on Saharan dust deposition in the A

“The book opens up with origin of mineral dusts, fundamental chemistry, morphology, size distribution and dust deposition. … It is strongly felt that the book has potential to be recommended to earth science scholars, specifically those having specific vision of exploring complex aerosol–earth system interactions with simple perspectives. Additionally, it may well serve as a link between fundamentals and research, and possibly help perspective readers in developing curiosity for exploring mineral dust–earth interactions.” (M. Kumar, R. S. Singh and T. Banerjee, Pure and Applied Geophysics, 2015)