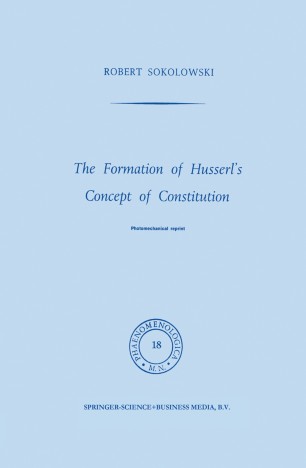 This work is conceived essentially as a historical study of the origin and development of one of the key concepts in Husserl's philosophy. It is not primarily meant to be an introduction to Husserl's thought, but can serve this purpose because of the nature of this concept. The doctrine of constitution deals with a philosophical problem that is fairly easy to grasp, and yet is central enough in the philosophy of Husserl to provide a con­ venient viewpoint from which other concepts and problems can be considered and understood. Husserl's thoughts on the phe­ nomenological reduction, on temporality, on perception, on evi­ dence, can all be integrated into a coherent pattern if we study them in their rapport with the concept of constitution. Further­ more, the concept of constitution is used by Husserl as an ex­ planatory schema: in giving the constitution of an object, Husserl feels he is giving the philosophical explanation of such an object. Thus in our discussion of constitution, we are studying the explanatory power of phenomenology, and in relating other phenomenological concepts to the concept of constitution, we are studying what they contribute to the philosophical expla­ nation that phenomenology attempts to furnish. To approach Husserl's philosophy in this way is to study it in its essential and most vital function.