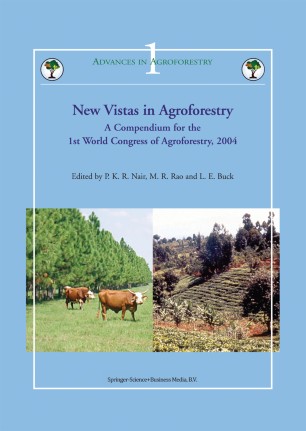 A Compendium for 1st World Congress of Agroforestry, 2004

Part of the Advances in Agroforestry book series (ADAG, volume 1)

It was in late 2002 that the idea of preparing a collection of multi-authored chapters on different aspects of ag- st forestry as a compendium for the 1 World Congress of Agroforestry, June 2004, was tossed around. With the approval of the idea by the Congress Organizing Committee, serious efforts to make it a reality got under way in early 2003. The rigorously peer-reviewed and edited manuscripts were submitted to the publisher in December 2003. Considering the many differentindividualsinvolved in the task as authors and manuscriptreviewers, we feel quite pleased that the task could be accomplished within this timeframe. We are pleased also about the contents on several counts. First of all, the tropical-temperate mix of topics is a rare feature of a publication of this nature. In spite of the scienti?c commonalities between tropical and temperate practices of agroforestry, the differences between them are so enormous that it is often impossible to mesh them together in one publication. Secondly, several of the chapters are on topics that have not been discussed or described much in agroforestryliterature. A third feature is that some of the authors, though well known in their own disciplinary areas, are somewhat new to agroforestry; the perceptions and outlooks of these scholars who are relatively unin?uenced by the past happenings in agroforestry gives a whole new dimension to agroforestry and broadensthescopeofthesubject. Finally, ratherthanjustreviewingandsummarizingpastwork,mostchapterstake the extra effort in attempting to outline the next steps.