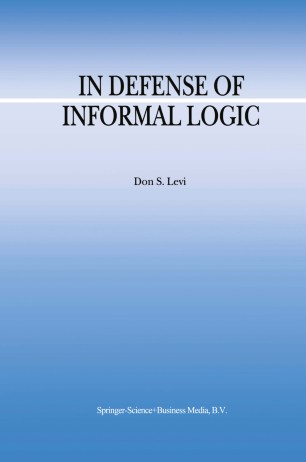 My impulse when I decided to collect into a single volume the essays on topics in logical theory and related subjects that I have written in the last fifteen years was to borrow from the title of a work by Sextus Empiricus, and call my collection "Against the Logicians." Although the essays address a variety of problems that interest me, the thread that runs through them is a scepticism about how logicians see things. So, the title appealed to me. However, I had second thoughts and chose instead a title of one of my own essays, "In Defense of Informal Logic", which emphasizes my support for other approaches. Although my criticisms of logical theory are designed to cut deeply, I do not want to be unresponsive to the needs that it is supposed to satisfy. However, my position that we have adequate resources for critically analyzing a particular argument and 00 not need a theory of argumentation, will not completely satisfy those who think that there is a need for it. So, I want them to know that I am taking their concerns seriously.