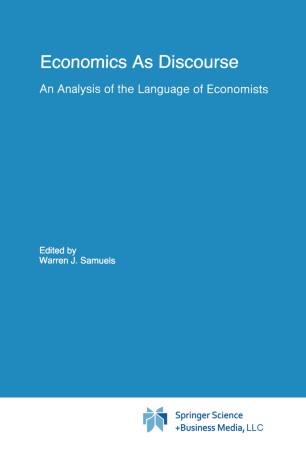 An Analysis of the Language of Economists

1 Warren J. Samuels The study of economics as discourse requires a perspective that focuses on the relationships among knowledge (or truth), discourse (or lan­ guage), and meaning. Central to this task is the recognition that the con­ duct of economic analysis uses words and that words embody meanings that are applied to the object of study, but do not necessarily derive from that object although they define that object for us. Knowledge Economists are engaged in efforts to understand and explain the econ­ omy. In the pursuit of this knowledge they have attempted to make coherent the respect(s) in which belief is to be accepted as knowledge, or the sense(s) in which this knowledge has the quality of "truth. " The field of methodology in economics parallels the fields of epistemology and philosophy of science in the attempt to make sense of and to prescribe the terms on which efforts at knowledge may be accepted as "true," or the terms on which statements can be accepted as "knowledge. " The conduct of such methodological inquiry typically treats economics as a science 1 2 ECONOMICS AS DISCOURSE engaged in the pursuit of truth as an epistemological category - though there have almost always been economists who were skeptical of the status of economics as a science, and the pursuit of knowledge is only one of three putative function of economics, the other two being psychic balm and social control.