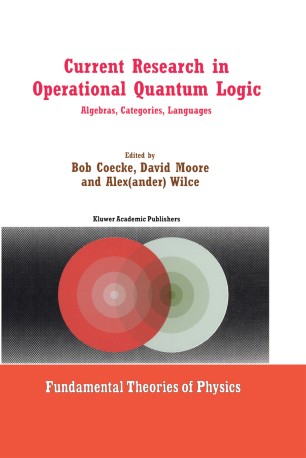 The present volume has its origins in a pair of informal workshops held at the Free University of Brussels, in June of 1998 and May of 1999, named "Current Research 1 in Operational Quantum Logic". These brought together mathematicians and physicists working in operational quantum logic and related areas, as well as a number of interested philosophers of science, for a rare opportunity to discuss recent developments in this field. After some discussion, it was decided that, rather than producing a volume of conference proceedings, we would try to organize the conferees to produce a set of comprehensive survey papers, which would not only report on recent developments in quantum logic, but also provide a tutorial overview of the subject suitable for an interested non-specialist audience. The resulting volume provides an overview of the concepts and methods used in current research in quantum logic, viewed both as a branch of mathemati­ cal physics and as an area of pure mathematics. The first half of the book is concerned with the algebraic side of the subject, and in particular the theory of orthomodular lattices and posets, effect algebras, etc. In the second half of the book, special attention is given to categorical methods and to connections with theoretical computer science. At the 1999 workshop, we were fortunate to hear three excellent lectures by David J. Foulis, represented here by two contributions. Dave's work, spanning 40 years, has helped to define, and continues to reshape, the field of quantum logic.