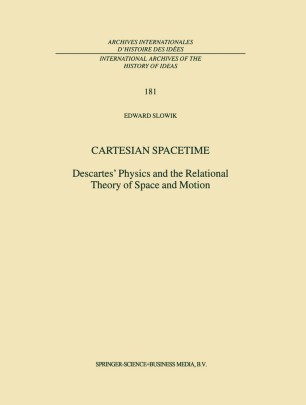 Descartes’ Physics and the Relational Theory of Space and Motion

Although Descartes' natural philosophy marked an advance in the development of modern science, many critics over the years, such as Newton, have rejected his particular `relational' theory of space and motion. Nevertheless, it is also true that most historians and philosophers have not sufficiently investigated the viability of the Cartesian theory.
This book explores, consequently, the success of the arguments against Descartes' theory of space and motion by determining if it is possible to formulate a version that can eliminate its alleged problems. In essence, this book comprises the first sustained attempt to construct a consistent `Cartesian' spacetime theory: that is, a theory of space and time that consistently incorporates Descartes' various physical and metaphysical concepts.
Intended for students in the history of philosophy and science, this study reveals the sophisticated insights, and often quite successful elements, in Descartes' unjustly neglected relational theory of space and motion.