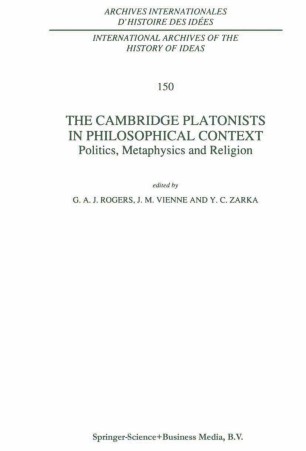 The Cambridge Platonists were defenders of tolerance in the political as well as the moral sphere ; they held that practical j u d g e m e n t came down in the last instance to individual conscience ; and they laid the foundations of our modern conceptions of conscience and liberty. But at the same time they ma intained the existence of eternal truths , and of a Good-in-itself , identical with Truth and Being, refusing to admit that freedom of conscience i m p li e d moral relativism. They were critics of dogmatism, and of the sectarian notion of "enthusiasm" as a source of illumination , on the grounds that both were disruptive of social harmony; they pleaded the cause of reason , in the hope that it could become the foundation of all human knowledge . Yet , for all that , they ma intained that a certain sort of mystical illumination lay at the heart of all true thought , and that human reason had validity only in virtue of i t s divine origin . They debated with Des cartes and took a keen interest in his mech- ism and his dualism ; they brought the atomistic theories of Democritus back into repute; and they sought to provide a detailed account of the causality link ing all phenomena.