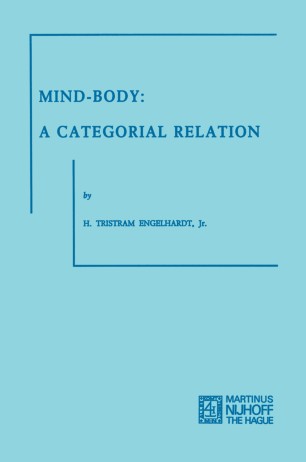 The relation of mind and body is one of the central problems of post­ Cartesian times. It has precluded a unified theory of the positive sciences and prevented a satisfactory notion of man's psychophysical unity. Gen­ erally it has been treated as a problem of causality and solutions have been sought in various schemata of etiological relations. Proposals have ranged from that of reciprocal action between two substances and two causal streams to a reduction of all phenomena to a single causal stream involving a single class of substances. This investigation will abandon such schemata and attempt to start afresh. It will analyze the relation of strata of meaning involved and will be only tangentially concerned with the causal relations of mind and body. This investigation will view the relation of mind and body no longer as the association of two substances, two things, but as the integration of two levels of conceptual richness. This is a move from hypostatization, reification, to categorialization - a move from the opacity of things to the relative lucidity of their significance. It recognizes that philosophy seeks not new facts about being but rather a way of understanding the integration of widely diverse domains of facts. Here the goal is the expla­ nation of the unity of being, specifically the being of mind and body, in terms of thought - that for which being has significance and that for which incongruities of significance appear as a problem.