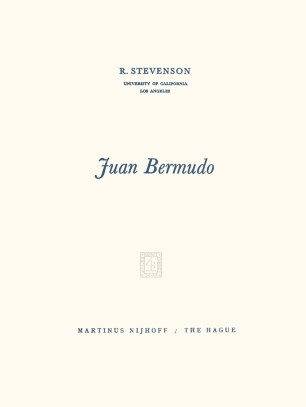 BERMUDO alone of the many Spanish theorists and composers of the 16th century seems to have written anything specifically for New World use. All the more fitting is it, then, to have completed this monograph in a part of the Spanish Indies that was stirring every Andalusian's imagination during the days when he was first sending his books across the Atlantic. In every way his was a remarkable personality. He was the first to compose and publish any organ music in Spain. As if the publication of such music in staff-notation were not enough he also published the first Spanish keyboard piece in tablature. He was the first in Spain to print any music in score. He is cited by Pincherle as the first to publish a harp method anywhere. He pioneered with the first treatise specifically designed for female use. He also "enjoys" the distinction of having become in Tapia's Verge! de Musica (1570) the most ruthlessly plagiarized writer in Spanish musical history. If bulk determines preeminence he stands above even Tomas de Santa Maria - who published only one volume, and that containing considerably less text. If range of interests determines rank no one else writing in Spanish during his century even approaches him. Nor does anyone else in Spanish have so many authorities at his fingertips.