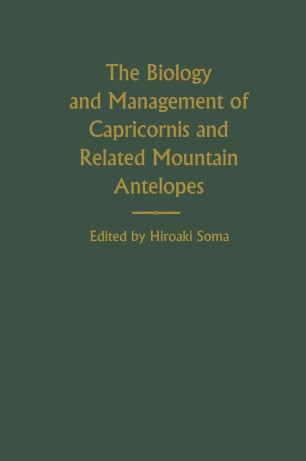 The Biology and Management of Capricornis and Related Mountain Antelopes

The Japanese serow (Capricornis crispus) has been protected by law since 1955 in Japan, because it was becoming rarer and approaching extinction. Thereafter, the serow population has increased gradually. The Japanese serow is thought to be a primitive relict species on the islands of Japan, and the geographical range of the serow has retracted upwards into the moun­ tain forests to avoid contact with humans. Little was therefore known about these animals. However, increasing losses of forest habitat due to exploit­ ation of the mountain forests or expanding cultivation by local foresters have driven the Japanese serow back into the lowlands of Japan. Since then, complaints of damage to trees and other vegetation have accumulated against the serow. In some prefectures the shooting of Japanese serow was allowed in order to prevent damage to forests. The animals killed were taken for research by the Departments of the Environment and by universities. was set up at the summit of Mt. Gozaisho, The Japan Serow Center Komono-cho, Mie Prefecture, in 1962 and has made a great effort to breed the serow and its related species in captivity. In addition, the International Studbook of Capricorn is crispus in captivity was established in Japan, and the state of breeding of the Japanese serows is now reported annually. However, without detailed scientific research, it is impossible to conduct sensible protection, conservation or management of the serow in captivity or in the wild.