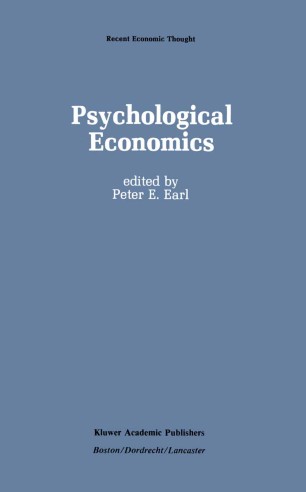 Peter E. Earl There is no doubt that it is appropriate for a series on Modern Economic Thought to include a book on the recent development of economic analysis incorporating ideas from psychology. This book was designed to appear in 1987, 15 years after the publication of a now classic collection of essays in honor of George Katona (Strumpel et aI. , 1972), who throughout the fifties and sixties had been tirelessly trying to persuade economists of the virtues of an infusion of psychology into their work. In the intervening 15 years there has been a considerable growth of interest along the lines for which Katona had been arguing. Many psychology-based economics mon­ ographs have appeared; a specialist quarterly, the Journal of Economic Psychology, commenced publication in 1981, with 1985 seeing the first issue of the Journal of Interdisciplinary Economics as yet another addition to growing ranks of "psychology-friendly" journals such as the Journal of Consumer Research and the Journal of Social Economics; and recently, within psychology itself, symposia have been taking place with a focus on the economics/psychology interface - for example, see the entire June 1982 issue of the British Journal of Social Psychology. For someone like myself, strongly committed to a psychological approach to economics, a 1 2 PSYCHOLOGICAL ECONOMICS problem of information overload and consequent ignorance of pertinent developments already looms large as a possibility.