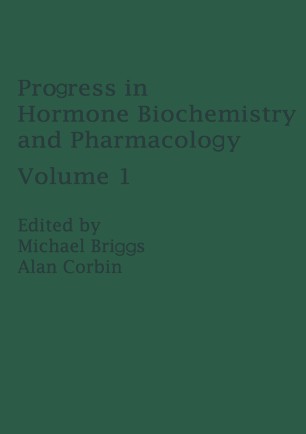 Progress in Hormone Biochemistry and Pharmacology

Part of the Progress in Hormone Biochemistry and Pharmacology book series (PRHO, volume 1)

Somatostatin was discovered in 1971, by Guillemin and his colleagues during their search for the hypothalamic growth hormone-releasing factor. A peptide was found in ovine hypothalamus which inhibited the release of growth hormone from cultured anterior pituitary cells. 1,2 Determination 3 of its amino acid sequence indicated that it was a tetradecapeptide with a molecular weight of 1639 (Figure lJ. An identical peptide was later isolated from porcine hypothalamus by Schally and his coworkers. 4 The peptide was named somatostatin in the belief that it was a hypothalamic releasing factor whose sole function was to inhibit the secretion of growth hormone. It soon became evident, however, that a peptide with identical immunologic characteristics and biologic activity was present in the D cells of pancreatic islets, in D-like cells of the gastrointestinal tract, in parafollicular cells of the thyroid gland, and in extrahypo­ thalamic neurons of both the central and peripheral nervous system in various species, including man. Moreover, studies employing synthetic somatostatin5 demonstrated that the peptide possessed a wide spectrum of biologic activities in addition to its inhibition of growth hormone. 56 S 0 MAT 0 S TAT I N 6 1 2 3 4 5 7 Ala-Gly-Cys-Lys-Asn-Phe-Phe I I S Trp 8 ~ L~S 9 I I Cys-Ser-Thr-Phe-Thr 14 13 12 11 10 FIG. 1: Structure of somatostatin 57 II. GENERAL DISTRIBUTION AND ACTIONS Somatostatin is widely distributed within both the central and peripheral nervous systems and in various other tissues (Table 1).