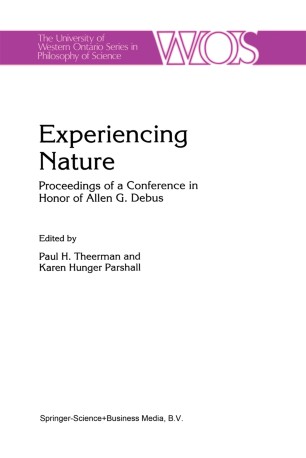 Proceedings of a Conference in Honor of Allen G. Debus

Part of the The University of Western Ontario Series in Philosophy of Science book series (WONS, volume 58)

This volume, honoring the renowned historian of science, Allen G Debus, explores ideas of science - `experiences of nature' - from within a historiographical tradition that Debus has done much to define. As his work shows, the sciences do not develop exclusively as a result of a progressive and inexorable logic of discovery. A wide variety of extra-scientific factors, deriving from changing intellectual contexts and differing social millieus, play crucial roles in the overall development of scientific thought. These essays represent case studies in a broad range of scientific settings - from sixteenth-century astronomy and medicine, through nineteenth-century biology and mathematics, to the social sciences in the twentieth-century - that show the impact of both social settings and the cross-fertilization of ideas on the formation of science. Aimed at a general audience interested in the history of science, this book closes with Debus's personal perspective on the development of the field.
Audience: This book will appeal especially to historians of science, of chemistry, and of medicine.