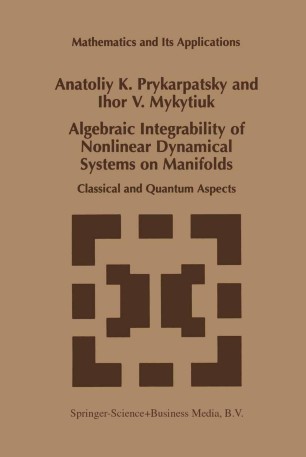 Part of the Mathematics and Its Applications book series (MAIA, volume 443)

In recent times it has been stated that many dynamical systems of classical mathematical physics and mechanics are endowed with symplectic structures, given in the majority of cases by Poisson brackets. Very often such Poisson structures on corresponding manifolds are canonical, which gives rise to the possibility of producing their hidden group theoretical essence for many completely integrable dynamical systems. It is a well understood fact that great part of comprehensive integrability theories of nonlinear dynamical systems on manifolds is based on Lie-algebraic ideas, by means of which, in particular, the classification of such compatibly bi­ Hamiltonian and isospectrally Lax type integrable systems has been carried out. Many chapters of this book are devoted to their description, but to our regret so far the work has not been completed. Hereby our main goal in each analysed case consists in separating the basic algebraic essence responsible for the complete integrability, and which is, at the same time, in some sense universal, i. e. , characteristic for all of them. Integrability analysis in the framework of a gradient-holonomic algorithm, devised in this book, is fulfilled through three stages: 1) finding a symplectic structure (Poisson bracket) transforming an original dynamical system into a Hamiltonian form; 2) finding first integrals (action variables or conservation laws); 3) defining an additional set of variables and some functional operator quantities with completely controlled evolutions (for instance, as Lax type representation).