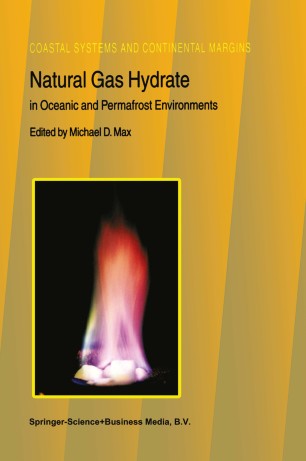 In Oceanic and Permafrost Environments

1. THE BEGINNINGS OF HYDRATE RESEARCH Until very recently, our understanding of hydrate in the natural environment and its impact on seafloor stability, its importance as a sequester of methane, and its potential as an important mechanism in the Earth's climate change system, was masked by our lack of appreciation of the vastness of the hydrate resource. Only a few publications on naturally occurring hydrate existed prior to 1975. The first published reference to oceanic gas hydrate (Bryan and Markl, 1966) and the first publication in the scientific literature (Stoll, et a1., 1971) show how recently it has been since the topic of naturally occurring hydrate has been raised. Recently, however, the number of hydrate publications has increased substantially, reflecting increased research into hydrate topics and the initiation of funding to support the researchers. Awareness of the existence of naturally occurring gas hydrate now has spread beyond the few scientific enthusiasts who pursued knowledge about the elusive hydrate because of simple interest and lurking suspicions that hydrate would prove to be an important topic. The first national conference on gas hydrate in the U.S. was held as recently as April, 1991 at the U.S. National Center of the U.s. Geological Survey in Reston Virginia (Max et al., 1991). The meeting was co-hosted by the U.s. Geological Survey, the Naval Research Laboratory, and the U.S.