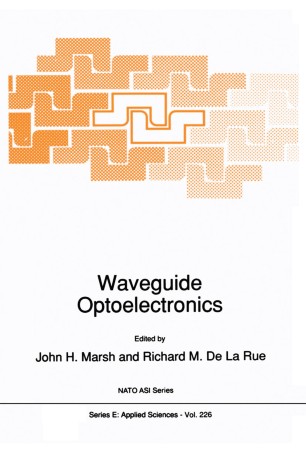 The NATO Advanced Study on Waveguide Optoelectronics was held at the Kelvin Conference Centre in Glasgow, Scotland, between 30 July and 10 August 1990. In aliSO students and 15 lecturers attended the ASI. The successof the meeting was due not only to the high quality of the presentations but also to the enthusiasm ofall the participants and their willingness to take part in the discussion and poster sessions. 1990 was also the year in which Glasgow was the European City of Culture. This resulted in interesting diversions during the middle weekend of the school and also made the meeting probably the first NATO ASI to share accommodation with the Bolshoi Opera and Ballet who gave memorable performances as partof the City's celebrations. This volume is, however, intended to be more than merely a record of presentations at the NATO meeting. The authors have written their material so as to be approachable by a first­ degree graduate with some background in optoelectronics. The principal materials considered are the III-V semiconductors, lithium niobate and silica. Recent developments towards optoelectronic integration in semiconductors, developments in devices fabricated in doped silica and doped lithium niobate, and developments in all-optical switching networks are highlighted. The role of reduced dimensional structures is examined in some detail.