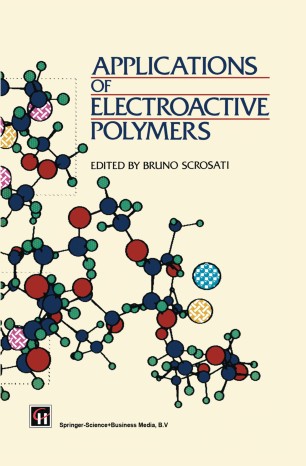 Electroactive polymers have been the object of increasing academic and industrial interest and in the past ten to fifteen years substantial progress has been achieved in the development and the characterization of this important new class of conducting materials. These materials are usually classified in two large groups, according to the mode of their electric transport. One group includes polymers having transport almost exclusively of the ionic type and they are often called 'polymer electrolytes' or, in a broader way, 'polymer ionics'. The other group includes polymeric materials where the transport mechanism is mainly electronic in nature and which are commonly termed 'conducting polymers'. Ionically conducting polymers or polymer ionics may be typically described as polar macromolecular solids in which one or more of a wide range of salts has been dissolved. The most classic example is the combina­ tion of poly(ethylene oxide), PEO, and lithium salts, LiX. These PEO-LiX polymer ionics were first described and proposed for applications just over ten years ago. The practical relevance of these new materials was im­ mediately recognized and in the course of a few years the field expanded tremendously with the involvement of many academic and industrial lab­ oratories. Following this diversified research activity, the ionic transport mechanism in polymer ionics was soon established and this has led to the development of new host polymers of various types, new salts and advanced polymer architectures which have enabled room temperature conductivity to be raised by several orders of magnitude.