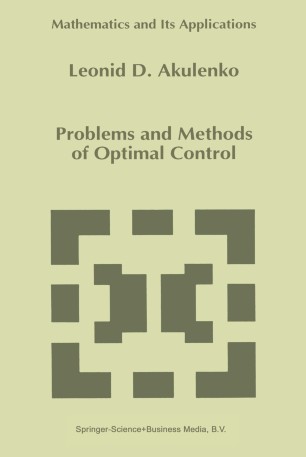 Problems and Methods of Optimal Control

Part of the Mathematics and Its Applications book series (MAIA, volume 286)

The numerous applications of optimal control theory have given an incentive to the development of approximate techniques aimed at the construction of control laws and the optimization of dynamical systems. These constructive approaches rely on small parameter methods (averaging, regular and singular perturbations), which are well-known and have been proven to be efficient in nonlinear mechanics and optimal control theory (maximum principle, variational calculus and dynamic programming). An essential feature of the procedures for solving optimal control problems consists in the necessity for dealing with two-point boundary-value problems for nonlinear and, as a rule, nonsmooth multi-dimensional sets of differential equations. This circumstance complicates direct applications of the above-mentioned perturbation methods which have been developed mostly for investigating initial-value (Cauchy) problems. There is now a need for a systematic presentation of constructive analytical per­ turbation methods relevant to optimal control problems for nonlinear systems. The purpose of this book is to meet this need in the English language scientific literature and to present consistently small parameter techniques relating to the constructive investigation of some classes of optimal control problems which often arise in prac­ tice. This book is based on a revised and modified version of the monograph: L. D. Akulenko "Asymptotic methods in optimal control". Moscow: Nauka, 366 p. (in Russian).