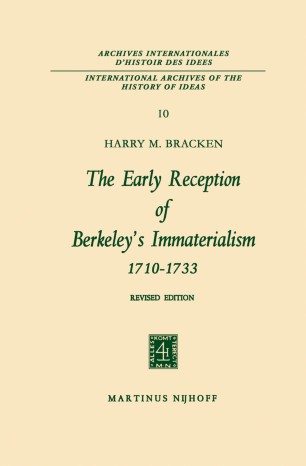 By the time of Immanuel Kant, Berkeley had been called, among other things, a sceptic, an atheist, a solipsist, and an idealist. In our own day, however, the suggestion has been advanced that Berkeley is better understood if interpreted as a realist and man of common sense. Regardless of whether in the end one decides to treat him as a sub­ jective idealist or as a realist, I think it has become appropriate to inquire how Berkeley's own contemporaries viewed his philosophy. Heretofore the generally accepted account has been that they ignored him, roughly from the time he published the Principles of Human Knowledge until 1733 when Andrew Baxter's criticism appeared. The aim of the present study is to correct that account as well as to give some indication not only of the extent, but more importantly, the role and character of several of the earliest discussions. Secondarily, I have tried to give some clues as to the influence this early material may have had in forming the image of the "good" Bishop that emerged in the second half of the eighteenth century. For it is my hope that such clues may prove helpful in freeing us from the more severe strictures of the traditional interpretive dogmas.