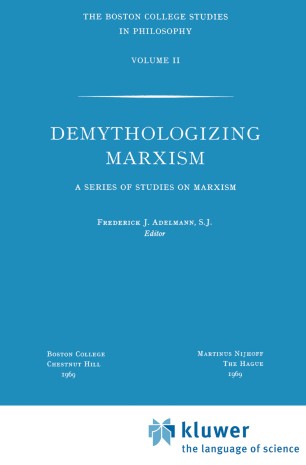 A Series of Studies on Marxism

Part of the The Boston College Studies in Philosophy book series (BCSP, volume 2)

This second volume of the Boston College Studies in Philosophy com­ memorates the one hundred and fiftieth anniversary of the birth of Karl Marx. This dedication bespeaks the evolution permeating the entire world today, not only in the sense of a development of ideas but more especially of the inner and sincere quest for peace intensifying in the hearts of all men. We Christians rejoice in the drive onward toward the fulfillment of peace on earth. We are sorry, however, that it is so late in Christian history and that it received its impulse more from the fear of nuclear armaments than from the development of Christian ideas. Nonetheless, here in the midst of so much bewilderment, we an optimistic note in the realization that these ideas can now, touch at long last, offer hope for a peaceful future. Strange as it may seem, there is currently a new interest in the philosophy of Marxism. This stems in part from the renewed study of the writings of the young Marx and a concentration on that aspect of his work which is more philosophical than politico-economic, such as is more prominent in the later Das Kapital. But even more, our interest in Marxism has occurred because of what has happened to the con­ temporary Marxists themselves. First of all, after Stalin's time a certain new openness, not yet perfect but nonetheless real, has developed in Russia to the benefit of scholars.