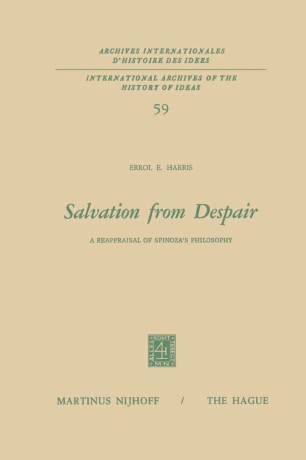 A Reappraisal of Spinoza’s Philosophy

My purpose in this book is to re-interpret the philosophy of Spinoza to a new generation. I make no attempt to compete with the historical scholar­ ship of A. H. Wolfson in tracing back Spinoza's ideas to his Ancient, Hebrew and Mediaeval forerunners, or the meticulous philosophical scrutiny of Harold Joachim, which I could wish to emulate but cannot hope to rival. I have simply relied upon the text of Spinoza's own writings in an effort to grasp and to make intelligible to others the precise meaning of his doctrine, and to decide whether, in spite of numerous apparent and serious internal conflicts, it can be understood as a consistent whole. In so doing I have found it necessary to correct what seem to me t0' be mis­ conceptions frequently entertained by commentators. Whether or not I am right in my re-interpretation, it will, I hope, contribute something fresh, if not to the knowledge of Spinoza, at least to the discussion of what he really meant to say. The limits within which I am constrained to write prevent me from drawing fully upon the great mass of scholarly writings on Spinoza, his life and times, his works and his philosophical ideas. I can only try to make amends for omissions by listing the most important works in the Spinoza bibliography, for reference by those who would seek to know more about his philosophy. This list I have added as an appendix.