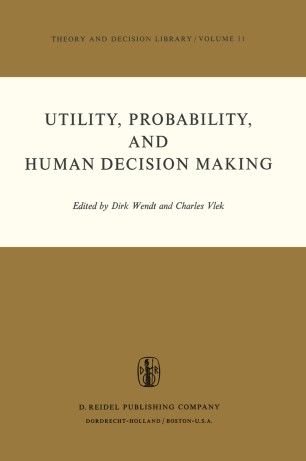 Human decision making involves problems which are being studied with increasing interest and sophistication. They range from controversial political decisions via individual consumer decisions to such simple tasks as signal discriminations. Although it would seem that decisions have to do with choices among available actions of any kind, there is general agreement that decision making research should pertain to choice prob­ lems which cannot be solved without a predecisional stage of finding choice alternatives, weighing evidence, and judging values. The ultimate objective of scientific research on decision making is two-fold: (a) to develop a theoretically sound technology for the optimal solution of decision problems, and (b) to formulate a descriptive theory of human decision making. The latter may, in tum, protect decision makers from being caught in the traps of their own limitations and biases. Recently, in decision making research the strong emphasis on well­ defined laboratory tasks is decreasing in favour of more realistic studies in various practical settings. This may well have been caused by a growing awareness of the fact that decision-behaviour is strongly determined by situational factors, which makes it necessary to look into processes of interaction between the decision maker and the relevant task environ­ ment. Almost inevitably there is a parallel shift of interest towards problems of utility measurement and the evaluation of consequences.