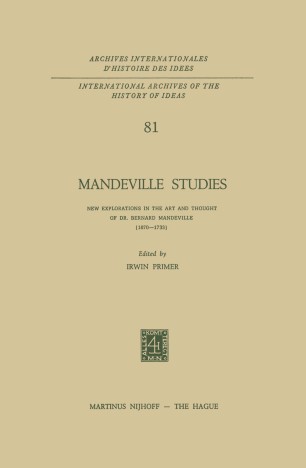 New Explorations in the Art and Thought of Dr. Bernard Mandeville (1670–1733)

For centuries readers have admired the writer who wields his pen like a sword - an Aristophanes, a Rabelais, a Montaigne, a Swift. Using ribaldry, satire and irony in varying proportions, such writers pierce the thick, comfortable hide of society and uncover, predictably, the corruption and hypocrisy that characterize the life of man in commercial society. Though a lesser talent than any of these literary giants, Bernard Mande­ ville is nevertheless a member of their class. The crucial year in the emergence of his reputation was 1723, the year in which he added his controversial Essay on Charity and Charity-Schools to his Fable of the Bees. From that point on he became one of the most reviled targets of the public guardians of morality and religion; for some he appeared to be truly the Devil incarnate, Mandevil, as Fielding and others spelled it. This reputation was attached to his name well into the nineteenth centu­ ry. In a diary entry for June 1812 Henry Crabb Robinson recorded the following conversation with the elderly Mrs. Buller: "She received me with a smile, and allowed me to touch her hand. 'What are you reading, Mr. Robinson?' she said. 'The wickedest cleverest book in the English language, if you chance to know it. ' - 'I have known the "Fable of the Bees" more than fifty years. ' She was right in her guess.