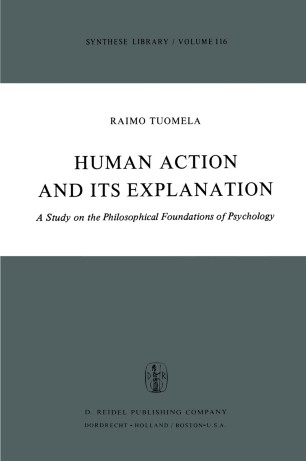 Human Action and Its Explanation

A Study on the Philosophical Foundations of Psychology

This book presents a unified and systematic philosophical account of human actions and their explanation, and it does it in the spirit of scientific realism. In addition, various other related topics, such as psychological concept formation and the nature of mental events and states, are dis­ cussed. This is due to the fact that the key problems in the philosophy of psychology are interconnected to a high degree. This interwovenness has affected the discussion of these problems in that often the same topic is discussed in several contexts in the book. I hope the reader does not find this too frustrating. The theory of action developed in this book, especially in its latter half, is a causalist one. In a sense it can be regarded as an explication and refin~ment of a typical common sense view of actions and the mental episodes causally responsible for them. It has, of course, not been possible to discuss all the relevant philosophical problems in great detail, even if I have regarded it as necessary to give a brief treatment of relatively many problems. Rather, I have concentrated on some key issues and hope that future research will help to clarify the rest.