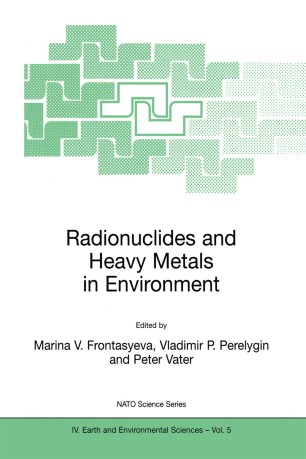 Radionuclides and Heavy Metals in Environment

This volume entitled "Radionuclides and Heavy Metals in Environment" contains the Proceedings of the NATO Advanced Research Workshop (ARW) "Monitoring of Natural and Man-Made Radionuclides and Heavy Metal Waste in Environment" that was held at the Joint Institute for Nuclear Research (JlNR), Dubna, Russia from 3 October to 6 October, 2000. Originally, it was planned to held the ARW in 1999, the year when NATO was celebrating its 50th anniversary. Few days before opening it had to be postponed because of problems in issuing visa for all the colleagues who intended to participate. The ARW was organized and conducted by the co-directors Prof. Vladimir P. Perelygin, Joint Institute for Nuclear Research, Dubna, Russia and Dr. Peter Vater, Philipps­ Universitat, Marburg, Germany. The JlNR was chosen as the host institute of ARW because of the lack of contact and real co-operation between the former Soviet Union (FSU) countries specialists in ecology and their Western well experienced colleagues. The selection of this location and supplementary funds provided by Russian Foundation on Basic Research, Moscow, Russia, and the JINR, Dubna., Russia made it possible to attain a rather large number of participants and observers from FSU countries. The JlNR provided to all the participants of the workshop an effective car/minibus transportation Moscow-Dubna-Moscow and a rather good accommodation in Dubna.