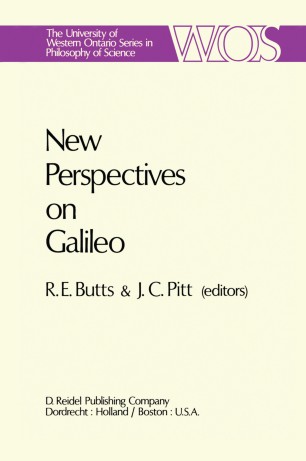 Papers Deriving from and Related to a Workshop on Galileo held at Virginia Polytechnic Institute and State University, 1975

Part of the The University of Western Ontario Series in Philosophy of Science book series (WONS, volume 14)

The essays in this volume (except for the contribution of Dr. Le Grand) are extremely revised versions of papers originally delivered at a workshop on Galileo held in Blacksburg, Virginia in October, 1975. The meeting was organized by Professor Joseph Pitt and sponsored by the Department of Philosophy and Religion, The College of Arts and Sciences, and the Division of Research of Virginia Polytechnic Institute and State University. The papers that follow deal with problems OIf Galileo's philosophy of science, specific and general problems connected with his methodology, and with historical and conceptual questions concerning the relationship of his work to that of contemporaries and both earlier and later scientists. New perspectives take many forms. In this book the 'newness' has, for the most part, two forms. First, in the papers by Wisan, Shea, Le Grand and Wallace (the concerns will also appear in some of the other contributions), greatly enriched historical discoveries of how Galileo's science and its method­ ology developed are provided. It should be stressed that these papers are attempts to recapture a deep sense of the kind of science Galileo was creating. Other papers in the volume, for example, those by McMullin, Machamer, Butts and Pitt, underscore the importance of this historical venture by discussing various aspects of the philosophical background of Galileo's thought. The historical and philosophical evaluations and analyses compliment one another.