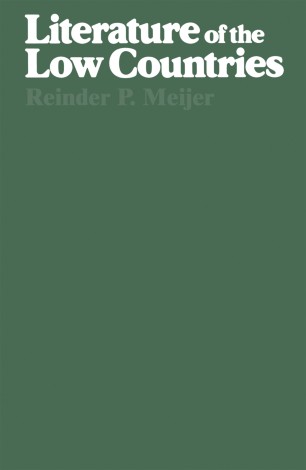 Literature of the Low Countries

A Short History of Dutch Literature in the Netherlands and Belgium

In any definition of terms, Dutch literature must be taken to mean all literature written in Dutch, thus excluding literature in Frisian, even though Friesland is part of the Kingdom of the Netherlands, in the same way as literature in Welsh would be excluded from a history of English literature. Simi­ larly, literature in Afrikaans (South African Dutch) falls outside the scope of this book, as Afrikaans from the moment of its birth out of seventeenth-century Dutch grew up independently and must be regarded as a language in its own right. . Dutc:h literature, then, is the literature written in Dutch as spoken in the Kingdom of the Netherlands and the so-called Flemish part of the Kingdom of Belgium, that is the area north of the linguistic frontier which runs east-west through Belgium passing slightly south of Brussels. For the modern period this definition is clear anough, but for former times it needs some explanation. What do we mean, for example, when we use the term 'Dutch' for the medieval period? In the Middle Ages there was no standard Dutch language, and when the term 'Dutch' is used in a medieval context it is a kind of collective word indicating a number of different but closely related Frankish dialects. The most important of those were the dialects of the duchies of Limburg and Brabant, and of the counties of Flanders and Holland.