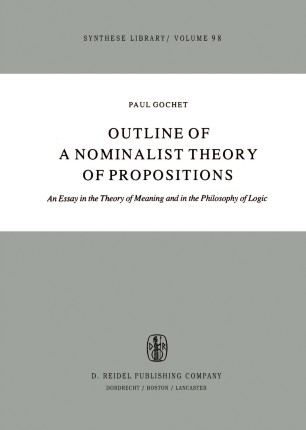 Outline of a Nominalist Theory of Propositions

1. IMPORTANCE OF THE SUBJECT In 1900, in A Critical Exposition of the Philosophy of Leihniz, Russell made the following assertion: "That all sound philosophy should begin with an analysis of propositions is a truth too evident, perhaps, to demand a proof". 1 Forty years later, the interest aroused by this notion had not decreased. C. J. Ducasse wrote in the Journal of Philosophy: "There is perhaps no question more basic for the theory of knowledge than that of the nature of 2 propositions and their relations to judgments, sentences, facts and inferences". Today, the great number of publications on the subject is proof that it is still of interest. One of the problems raised by propositions, the problem of deter­ mining whether propositions, statements or sentences are the primary bearers of truth and falsity, is even in the eyes of Bar-Hillel, "one of the major items that the future philosophy oflanguage will have to discuss". 3 gave a correct summary of the situation when he wrote in his Ph. Devaux Russell (1967): Since Peano and Schroder who, in fact, adhered more faithfully to Boole's logic of classes, the logical and epistemological status of the proposition together with its analysis have not ceased to be the object of productive philosophical controversies. And especially so since the establishment of contemporary symbolic logic, the foundations 4 of which have been laid out by Russell and Whitehead. * 2.