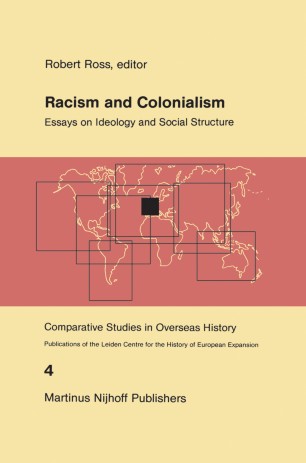 1. REFLECTIONS ON A THEME by ROBERT ROSS This book, the fourth in the series Comparative Studies in Overseas History, and, like its predecessors, the product of a symposium held by the Leiden Centre for the History of European Expansion, is organised around a single theme, the relationship between the ideological structures of domination and oppression that have come to be called racism and the political and economic ones which grew out of Europe's conquering and ruling much of the rest of the world. By racism, we mean those systems of thought in which group characteristics of human beings, of a non-somatic nature, are considered to be fixed by principles of descent and in which, in general, physical attributes (other than those of sex) are the main sign by which characteristics are attributed. In addition, almost by definition, the systems of thought entailed in this require that there is a hierarchy of the various races, and that those people in the lower ranks of that hierarchy are seriously disadvantaged, at least if the proponents of racist thought are able to impose their will on the society in which they live. ! The exclusion of the discrimination of women from the concept of racism should not be thought as entailing that racist and sexist ideas do not have much in common, since both derive from essentially biological determinism, and indeed 2 racist societies have historically almost invariably been strongly sexist.