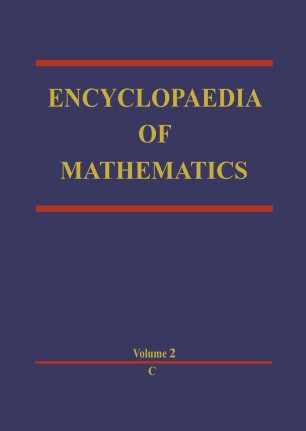 C An updated and annotated translation of the Soviet ‘Mathematical Encyclopaedia’

Part of the Encyclopaedia of Mathematics book series (ENMA, volume 2)

This ENCYCLOPAEDIA OF MATHEMATICS aims to be a reference work for all parts of mathematics. It is a translation with updates and editorial comments of the Soviet Mathematical En­ cyclopaedia published by 'Soviet Encyclopaedia Publishing House' in five volumes in 1977 - 1985. The annotated translation consists of ten volumes including a special index volume. There are three kinds of articles in this ENCYCLOPAEDIA. First of all there are survey-type articles dealing with the various main directions in mathematics (where a rather fine subdivision has been used). The main requirement for these articles has been that they should give a reasonably complete up-to-date account of the current state of affairs in these areas and that they should be maximally accessible. On the whole, these articles should be understandable to mathe­ matics students in their first specialization years, to graduates from other mathematical areas and, depending on the specific subject, to specialists in other domains of science, engineers and teachers of mathematics. These articles treat their material at a fairly general level and aim to give an idea of the kind of problems, techniques and concepts involved in the area in question. They also contain background and motivation rather than precise statements of precise theorems with detailed definitions and technical details on how to carry out proofs and constructions. The second kind of article, of medium length, contains more detailed concrete problems, results and techniques.

"The publication of the English edition of the Soviet Encyclopaedia of Mathematics is an important event. I looked at several entries in my own field of algebra and found the articles authoritative, well organized, and lucidly written. The volumes will be of graet help to anyone interested in mathematics."
K.A. Hirsch, Professor Emeritus, Queen Mary College, London
The articles are well written (and) authoritative... all large academic libraries should have (the Encyclopaedia of Mathematics)."
Choice, June 1988
"Not a text to read from cover to cover (though one is tempted?), but a fascinating and invaluable reference book, which should be on every library's shelves. Highly recommended.'
Mathematik, Vol.35, 1988
Buy options