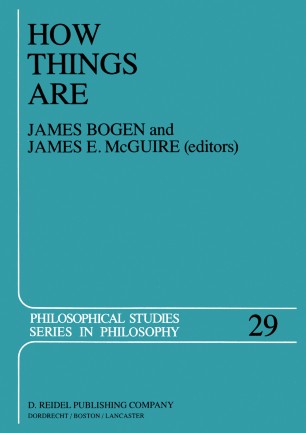 Studies in Predication and the History of Philosophy and Science

One of the earliest and most influential treatises on the subject of this volume is Aristotle's Categories. Aristotle's title is a form of the Greek verb for speaking against or submitting an accusation in a legal proceeding. By the time of Aristotle, it also meant: to signify or to predicate. Surprisingly, the "predicates" Aristotle talks about include not only bits of language, but also such nonlinguistic items as the color white in a body and the knowledge of grammar in a man's soul. (Categories I/ii) Equally surprising are such details as Aristotle's use of the terms 'homonymy' and 'synonymy' in connection with things talked about rather than words used to talk about them. Judging from the evidence in the Organon, the Metaphysics, and elsewhere, Aristotle was both aware of and able to mark the distinction between using and men­ tioning words; and so we must conclude that in the Categories, he was not greatly concerned with it. For our purposes, however, it is best to treat the term 'predication' as if it were ambiguous and introduce some jargon to disambiguate it. Code, Modrak, and other authors of the essays which follow use the terms 'linguistic predication' and 'metaphysical predication' for this.